The Scoop on Older Adults and Sex

Sex. Parents often dread having “the talk” with their teenager, and for aging adults and their children or caregivers, the topic can be equally uncomfortable. But intimacy is an important part of life at any age.

Recent trends in sexual activity among older adults indicate that the taboo topic of sex is becoming an important conversation topic for healthy aging. Not only can sexuality assist in combatting loneliness and depression as we age, but statistics show that most older adults are more sexually active than their families and care communities realize.

What are the Benefits of Sex in Older Adults?

A study published in the journal Sexual Medicine indicates that sexual activity is associated with improved well-being among older adults, as measured through higher enjoyment of life scores.

Led by Dr. Lee Smith from Anglia Ruskin University and Dr. Sarah Jackson from UCL Institute of Epidemiology and Health Care in the United Kingdom, the study involved analyzing survey data from 6,879 older adults, with an average age of 65, living in England. It found that older men and women who reported any type of sexual activity in the previous 12 months had a higher life enjoyment score than those who were not sexually active.

They Have it.
Whether or not sexual activity is being candidly discussed within families and health care settings, the statistics are clear: many older adults are having sex. According to a University of Michigan National Poll on Healthy Aging, 76% of adults between the ages of 65-80 agreed that sex is an important part of a romantic relationship at any age. Two in five (40%) indicated that they are currently sexually active.

Parents Aren’t Talking; Children Aren’t Asking
Sex and dating are, quite literally, the last thing adult children want to talk about with their aging adult parents, according to results from a survey commissioned by Home Instead Inc., franchisor of the Home Instead network. Fifty-six percent of aging adult parents said sex was the most difficult topic to discuss. Only a third of adult children reported that they were even the least bit comfortable with the topic.

The combination of the percentage of older adults who are sexually active and the hesitation of most families to discuss this activity suggests a communication barrier when it comes to older adults and sex.

They May Not Be Aware of The Risks
Sexually transmitted infections (STIs) are on the rise in the 55 and older age group. Nationally, adults 55 and over saw the highest increase in rates of chlamydia, gonorrhea and syphilis among any age group in the past five years, according to data from the Centers for Disease Control and Prevention. This could be due in part to the fact that older Americans tend to underestimate their risk for diseases like HIV and are far less likely than younger people to take precautions when having sex, according to a study by the National Institutes of Health.

In addition, Baby boomers originally became sexually active at a time when facts about STDs and safe sex were not as readily available as they are today.

What Does This Mean for Families and Caregivers?

Open and frank discussions with older adults about their needs for physical connection and emotional intimacy could be beneficial.

For tips and ideas on how to start those difficult conversations, check out the 40/70 Guide, An Action Plan for Successful Aging.

It’s also important to acknowledge the role that living situations play in protecting an aging adult’s privacy and independence. Aging-in-place resources, like home care services, may be key in retaining an environment where both physical and emotional needs of an older can be met.

Whether you need companionship or help getting around town, Home Instead delivers the compassionate in-home care services your family deserves.
Find Home Care 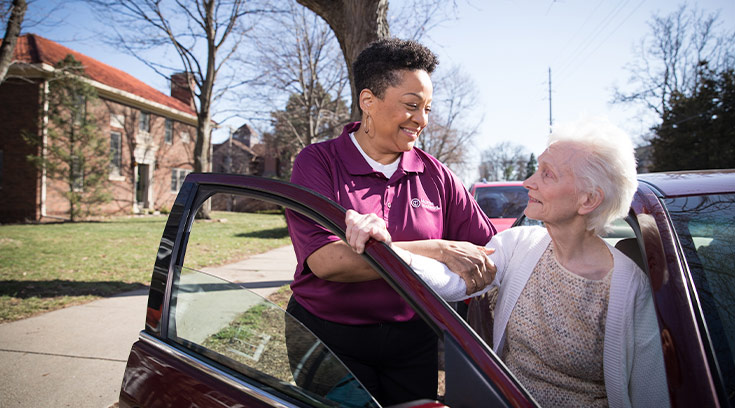