Read about how Jason Crane's Grandma inspired his passion to help seniors age safely in their homes.

While growing up in his hometown of Appleton, Wisconsin, our owner, Jason Crane, became very close to his Grandma Damon. Prior to Jason’s birth, she suffered a severe stroke, leaving her wheelchair bound and unable to speak more than a few words. 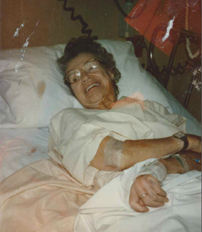 When Jason received his drivers license on his 16th birthday, he made a point of driving to Grandma Damon’s nursing home and wheeled her across the street, to the local Piggly Wiggly grocery store and deli, for coffee and her favorite Chocolate Donut! A routine was formed that day. Jason continued to visit Grandma Damon every week after school and during school breaks while in college.

Jason met his wife, Dawn, while attending Marquette University. Shortly after they were married, Jason’s career with Guitar Center took off and he accepted a position at the headquarters in Agoura Hills, California. While in California, Jason and Dawn missed family and the impact their aging parents would have on their children.

This led them to begin visiting a nearby nursing home resident, Juanita Spencer, after church every week, to brighten her day, and teach their children the importance of honoring and serving seniors in the community. Juanita passed away a few years later and Jason and Dawn named their 4th child, Spencer, in honor of Mrs. Spencer.

A few years ago, Jason’s mother, Carole, was diagnosed with a rare form of Dementia called Primary Progressive Aphasia (PPA). As the disease has progressed, Jason’s father, James, has become her primary caregiver. Both of his parents are committed to staying in their home and have brought in Home Instead services to provide care and needed respite.

It is these life experiences, and Jason’s passion for seniors, that led him to join Home Instead in 2013 as President of five franchises in Wisconsin. During his time as President, Jason learned the ins-and-outs of the industry, preparing him for the next step.

In the summer of 2018, Jason and Dawn took a leap of faith and purchased two existing franchise locations in Minnesota; Home Instead Andover and Waite Park. The goal of providing seniors – like Jason’s mother, Carole – the option of remaining “Home Instead” has been rewarding for both Jason and Dawn. As parents of five adult children, Jason and Dawn know the value of family, and would love the opportunity in the future to meet you and yours!