Joy Johnson joined Home Instead in January 2019 after she and husband Ron acquired the franchise office. Acquiring the franchise and becoming a part of the Home Instead family and network became one of the best professional decisions she ever made. It is a decision which became very easy when the right time came about and after being involved in the care of her father who suffered from Alzheimer’s Disease for several years. Home Instead Senior Care became an instrumental part of her family care team.

Helping and making a difference in someone’s life was always easy for her. This is a true testament of her dedication to service throughout her professional career as a financial consultant in the Media & Entertainment industry. She started her career in the Assurance group specializing in the Energy and Utility industry of Arthur Andersen, LLP in Los Angeles and she then moved to The Walt Disney Company and other film studios such as Warner Bros., and NBC Universal. During her 20+ years of finance experience, she helped entertainment companies with mergers and acquisitions, SEC reporting, financial consolidations, forecasting and planning, global finance transformations, and financial systems implementations.

Joy is responsible for overseeing the day to day operation of Home Instead franchise office. She also focuses on client service and continuing the business growth within the community. Joy also holds a bachelor’s degree in Business and Management from Pepperdine University and a master’s degree in Business Administration from the University of Southern California Marshall School of Business.

Outside of Home Instead, Joy volunteers and is a Board Member of USC Marshall Partners, a philanthropic organization whose purpose is to provide scholarship to deserving students at the Marshall Business School and Leventhal School of Accounting. In her spare time, Joy enjoys cooking, reading and riding her bike. 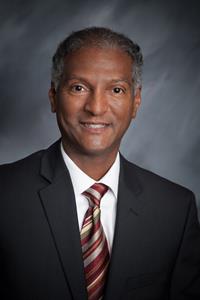 Ron Johnson joined Home Instead in January 2019 with his wife, Joy. He was introduced to Home Instead after having been involved in the care of his father in-law who suffered from Alzheimer’s Disease.

Ron is a retired Sergeant from the Los Angeles Police Department. During his 30 years of serving the Los Angeles community, he witnessed several instances where seniors were not being taken care of properly by their loved ones. This is due to their lack of resources or simply lack of knowledge on how to approach the best care practices for their seniors. In his role at Home Instead, he is able to continue to educate and serve the public by being involved in the communities the franchise office serves.

Ron has a strong affinity to seniors due to the special bond he shared with his maternal grandmother who helped raise him in South Los Angeles. Ron fondly remembers his grandmother standing so proudly and applauding him during his graduation at the Police Academy. It is through this family love that Ron carries with him his dedication and commitment to serve others.

Ron provides his leadership and guidance in several areas of the business including the responsibility of ensuring the business financial operation is standing on a solid foundation. In his spare time, Ron enjoys managing investments and construction projects.

Your Home Instead team in San Gabriel, CA possesses a heartfelt desire to work with seniors in the community. It is our ultimate goal to forge extraordinary relationships between our clients and their CAREGivers.