Care Professional of the Quarter

At Home Instead®, our success revolves around our Care Professionals– and we know it! We celebrate and recognize Care Pros each quarter with our Care Professional of the Quarter Award.  These caregivers demonstrate each day their commitment to enhancing the lives of seniors in our community and we are forever grateful for their efforts.

Our Care Professional of the Quarter Recipients

Care Professional of the Quarter - Olamide

As a family caregiver, Olamide was praised for compassionately taking excellent care of her siblings, nieces and nephews as if they were her own children. “I did not leave out my neighbors from my caregiving because caring and sharing is so pleasurable to me. It is an ingrained trait, one that ‘oils my engine’ to do more. It was the same caring spirit that made me follow the same trend when I arrived in the United States. You see, it is in my blood because I’ve been working at professional caregiving for six years,” said Olamide.

Caregiving was modeled for Olamide. “First, I grew up in a home where my parents fancied giving and sharing in the same way my grandparents from both sides also did. Emulating such gestures inspired me. I went miles to care for my grandparents anytime we visited them for the holidays. I would also make sure I checked on my grandparents daily,” Olamide said. Caregiver of the Quarter - Sheree

Sheree Lucas was wondering: “Could professional caregiving be my calling?” She had been inspired by a couple of registered nurses who took care of her husband during a hospital stay. “When I saw the nurses taking care of my husband, who was in pain, I thought that was great. I thought maybe I could do that. One nurse went above and beyond the call of duty, truly the extra mile. She was even changing his bed linen and didn’t have to do that because CNAs are supposed to handle it,” Sheree said.

Last summer, Sheree began searching for a professional caregiving position, and she found Home Instead. “I had three interviews with Home Instead. I told David I really believed this is my calling,” said Sheree, who joined Home Instead in July 2021.

Caregiver of the Quarter - Theresa

Theresa is a people-person extraordinaire who has many endearing traits. Friends, family and acquaintances watched as Theresa successfully managed a restaurant franchise for 30 years before a sore knee forced her retirement from the physically demanding work.

A sister-in-law believed Theresa’s first calling was singing because of her beautiful voice and the fact that she had toured with choirs that performed in New Orleans, Jackson, Mississippi and other cities. Theresa’s sister-in-law, a Home Instead® Caregiver, also said Theresa’s “other calling” was senior care. Caregiver of the Quarter - Juanita

By any measure, it was a sight to behold for shoppers and shelf stockers.

Caregiver Juanita hurried through the grocery store aisles as she raced to try to keep up with her 92-year-old Home Instead® client, who was moving in overdrive despite wearing high heels.

Recalling one of her most memorable Home Instead caregiving days, Juanita explained: “As we shopped, she looked at her watch and told me, ‘Let’s go. You’re going to be late to clock out.’ She grabbed the shopping cart and started running to the cashier. She did not want to slow down. I couldn’t believe it.”

Juanita added: “That was the first day of 10 years we spent together.” Caregiver of the Quarter - Cynthia

“I’ve been doing this kind of work since I was a kid,” Cynthia said. “I remember helping my grandmother when I was as young as 10. She stayed in the front part of our house. In the mornings, I’d fix her breakfast and wash her face. I was taught how to provide personal care for her. Our family did not believe in nursing homes.”

Later, Cynthia’s more detailed caregiving knowledge was acquired out of necessity. It consisted of a short, intensive training course from a cousin who was a registered nurse. Cynthia’s brother was paralyzed at age 25 as the result of a car accident. “My cousin taught my mother, one of my sisters and me how to take care of him,” said Cynthia, whose brother nearly reached 56 before he passed away. Caregiver of the Quarter - Yvonne

When Yvonne was 15 or 16, she became one of her neighborhood’s babysitters. “Beyond babysitting, I did many other things to help neighbors, such as braiding hair,” Yvonne recalled. One of Yvonne’s first senior-care duties occurred when she helped her boyfriend’s mother. That eventually led to a 27-year home-care career with New York agencies.

In 2010, Yvonne moved to Houston, where two of her children live. During her first year as a Houston resident, Yvonne worked at a child-care center. That’s where she saw a Home Instead® flyer. “My daughter, who is a lawyer, notary and also works in tax preparation, helped me work up a resume, and we put it online,” Yvonne said. “One thing led to another, and I had a new job.”

Caregiver of the Quarter - Lauren

Lauren is a wise, savvy Caregiver who knows how to relate to her clients wherever they are mentally or physically. Late one night, Lauren metaphorically climbed into a client's realistic dream, helped him steer a careening car and safely apply the brakes.

Recalling the situation, Lauren said: "The client was jolted in the middle of sleep. He was calling for help. He was sitting on the side of his bed and had his arms out in front of him. When I asked what was wrong, he said: 'The car is out of control.' He was dreaming he went on a joyride. The car was going too fast, and he couldn't stop." Speaking figuratively, Lauren said: "So, I got in the car with him and helped him slow down and bring it to a stop so he could go back to sleep." Caregiver of the Quarter - Minerva

Caregiver of the Quarter Minerva hasn't been on vacation in three years. Minerva cannot bear to be apart for long from her 97-year-old client for whom she serves each day of the week except Fridays. The feeling is mutual. "She misses me on Friday," Minerva said.

"As for a vacation, I don't want to leave her because I don't want her to be depressed. She lives by herself. I spend holidays with her if she needs me," said Minerva, who has worked for nine years for the award-winning Home Instead® franchise, owned by Mechelle and David Minter, that serves central Houston. 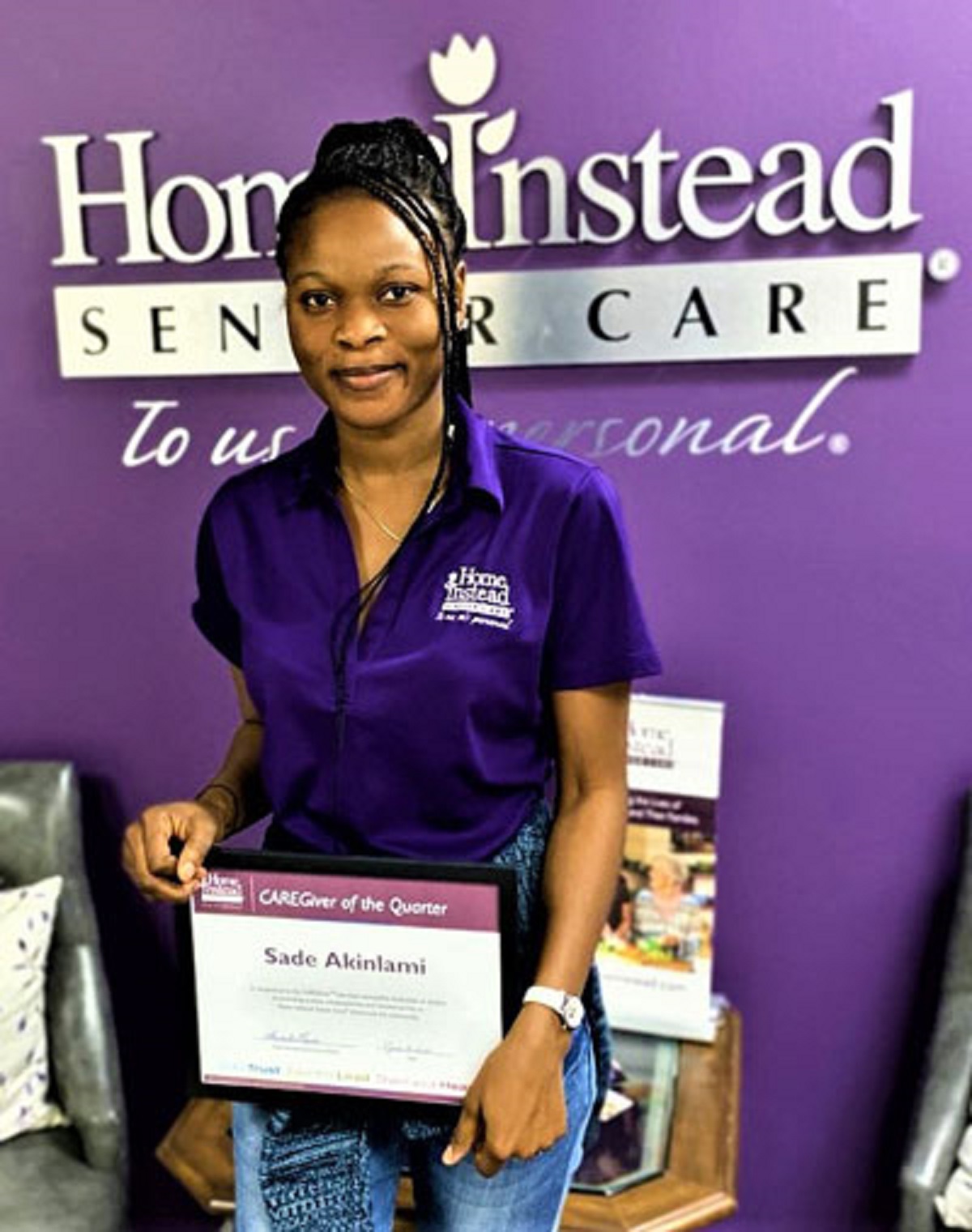 Caregiver of the Quarter - Sade

Among those tender-hearted souls who have taken care of elderly family members over time, Sade Akinlami's depth of compassion might be unequaled. Arriving in the U.S. with many years of family caregiving experience, it's not surprising Sade was an immediate success with Home Instead Senior Care®.

Sade was honored as a Caregiver of the Quarter just four months after joining the award-winning Home Instead franchise owned by Mechelle and David Minter that serves central Houston, including Bellaire, The Heights, Medical Center, River Oaks and West University. Caregiver of the Quarter - Pat

When Pat Orlando was growing up in tiny Hunnewell, Kansas, about a quarter-mile north of the Oklahoma border on U.S. Highway 177, she might have been one of the youngest residents. Her three siblings, all older brothers, already had left the family nest.

Pat joked: "It felt as if I might have been the only child in Hunnewell, where there probably were only about 200 people in all. So, I grew up around mostly older people. I picked up the mail each day for an elderly neighbor and helped her clean the house. As payment, she gave me penny candy."
Read More About Pat's Caregiving Journey Caregiver of the Year- Shiphrah

Shiphrah Odim’s spectacular work with her Home Instead Senior Care® clients in central Houston more than just checked all the boxes to earn her franchise’s Caregiver of the Year honor for 2019. Shiphrah quietly and humbly has gone above the call of duty when fulfilling the Home Instead principles: “Build Trust, Take the Lead and Share Your Heart.”