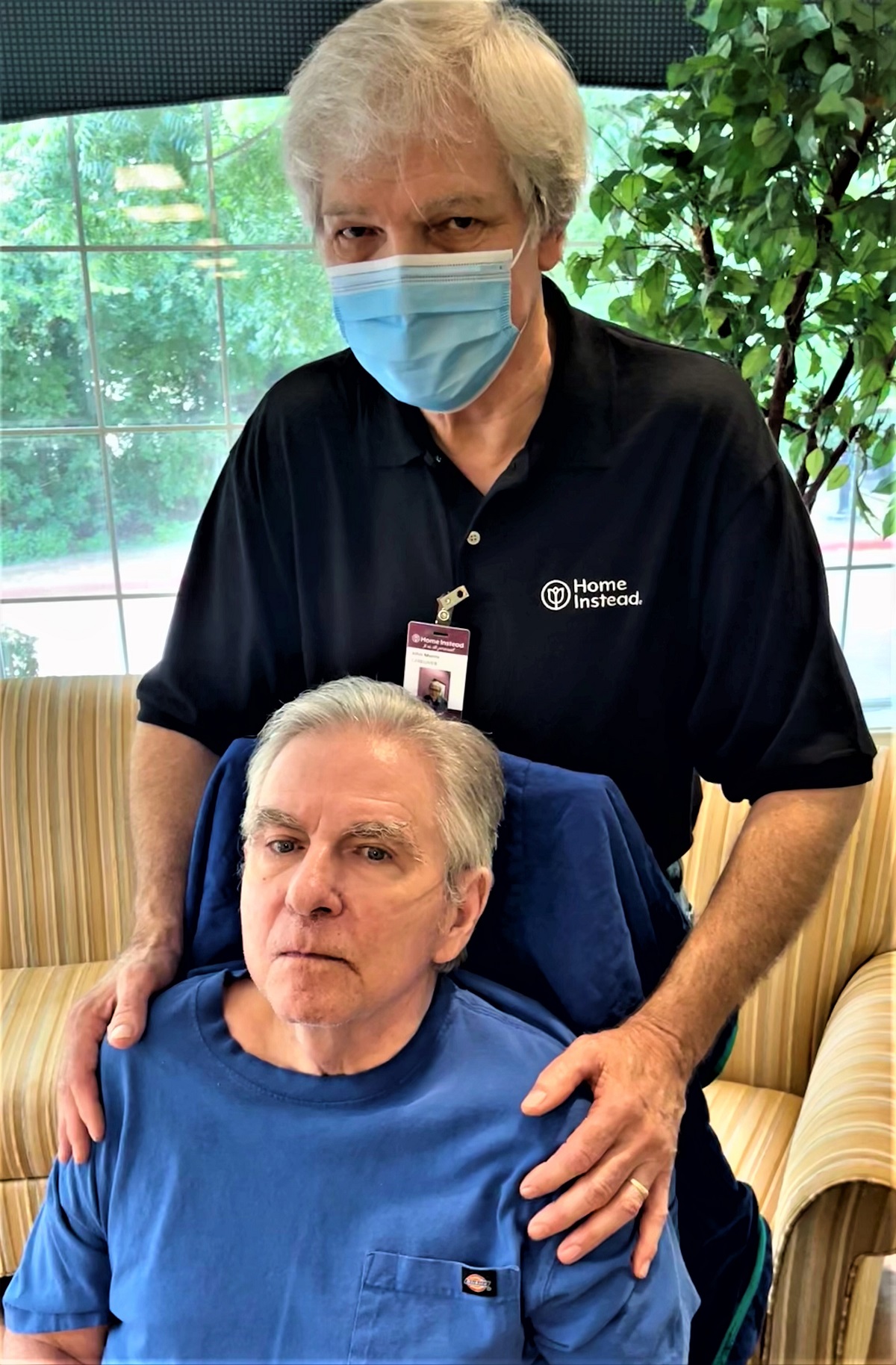 Music and medical challenges are two of the unbreakable companionship threads that bond Home Instead® Care Professional of the Month John Morris and his client, Mr. M.

John recently was wheeling Mr. M. around his skilled nursing home and stopped so they could enjoy several 1970s songs on John’s cell phone. That’s when John’s memories of his serious stroke in 2019 started to flow. John recalled: “I was helpless after my stroke, thinking maybe I’d never work again. After three months of speech therapy, I had this hope God would give me the ability to see through the eyes of seniors, at least to some degree. That helped in my joy and compassion for seniors.”

Recalling that memorable day with Mr. M., John said: “He and I went outside to look at flowers and watch the bird feeder. The day before, at lunchtime, he jokingly called a lady ‘a Desperado.’ Both of us, being guitar musicians of sorts, immediately smiled and thought of the Eagles’ song title from almost 50 years ago. So, when we were outside that next afternoon, we listened mostly to Eagles’ songs. Mr. M. mouthed the words, which was same experience I’d had with my stroke. Following my stroke, I had recalled from the right side of my brain many songs encoded into my memory. During our shared experience, Mr. M. was smiling ear to ear. Music is magical. I understood perfectly. There were tears and joy!”

John’s client story is one of many that have left Home Instead owner Todd Felker smiling, and he is glad Director of Client Services Jay Hill hired John last February at the award-winning franchise in Plano that serves Collin County. Todd told another story involving John: “A client’s daughter called to say John’s visit with her father in the intensive care unit at a hospital was a blessing. The client was happy to see John, and the client talked for the first time since being hospitalized. The client agreed to eat something while John was there. The client’s daughter wanted us to know what a positive impact John made that day.”

Todd added: “John had been retired when he joined our Home Instead franchise. He is a wonderful Care Professional, and his clients love him. He is eclectic and loves all types of music but prefers classic rock. He was a disc jockey for a local radio station, Q102, years ago. John loves playing the guitar and carries it everywhere he goes. He plays for our Home Instead clients. He also ministers to those who want to listen.”

Todd pointed out John had been a family caregiver before joining Home Instead. John explained: “My previous caregiving involved my mother and brother, both of whom have passed on. They both lived with my wife Deborah and me. Deborah and I have been married for nearly 46 years. She worked at a nursing home long ago. She cared so deeply for the residents, and through her tears, she inspired me to help others. I am thankful for the opportunity to work for Home Instead. I believe someone contacted me, and I applied at Home Instead over two other possible employers.”

John built a terrific career around music and the radio industry. “I worked many years as a staff announcer, program director and federally licensed engineer for television and radio broadcast systems. Mostly, I was a disc jockey and newsman. I also was a part-time talk show host in times past, and I had lots of commercial experience,” he said.

“I worked for many radio stations, including the Dallas-Fort Worth-Plano-Waxahachie market, even stretching to the Square of Downtown Athens, Texas. Rock station classics included KFWD-FM, Rocker Q102 and KTXQ-FM as well as Top 40 and numerous country stations. My best experience was with KXVI-AM, a contemporary Christian music station.

John also is handy. “I worked as a contractor for the H.L. Hunt family in Highland Park for many years after working in radio. I performed special finishes, including marbelizing, cabinet finishes of all kinds, stone fireplaces, hardware finishes on stairs, chandeliers to match stair ironwork, match tilework and more,” he said.

Senior care is now his passion, of course. As a faith-based person, it is well with his soul. “You cannot do this job without caring and love, which involves tears. It happens a lot from God’s extravagant compassion. I have the innate ability to be quiet and listen to those who have stories to tell. They are masterpieces of His Creation!” John said.

All Home Instead Care Professionals are screened, trained and insured. For inquiries about employment, please call (469) 916-9202 or apply online. For further information about Home Instead, visit our website.

Back to All News